Frendoconcha accipenserinus
(Sturgeon-like Shell Crusher)
This large, anadromous catfish is a member of the clade Loricariidae, a group which can be readily distinguished by extensive armor and a suctorial mouth. The Longsnout Copotone and relatives, informally called the 'molluscivorous loricariid clade', are descendants from one or more of the Pterygoplichthys species which had a strong propensity for biological invasion. That is the limit of what can be stated authoritatively about the evolution of the molluscivores, as the Pterygoplichthys radiation is recent and chaotic to the degree that long branch attraction, homoplasies, and unexpected gene transfers make every phylogenetic analysis highly divergent from the one before. As the Longsnout Copotone inhabits sub-tropical and temperate waters far beyond the Ais archipelago, this suggests that it may not be a part of the loricariid radiation indigenous to that region. The aptly-named Titan Pleco is similar to the molluscivorous loricariids as it also has an anadromous life cycle, highly dexterous barbels, and the facultative ability to crush molluscs, however the adaptations for feeding on floating vegetation and unusual fin reductions/modifications suggest it is a distant relative at best. 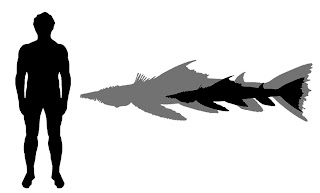 1.75 m human with 1.25 m SL and 2 m SL specimens.
Adult Longsnout Copotone exhibit no sexual size dimorphism and average 1.25 m SL (1.5 TL) and 20 kg on Ais. Specimens as large as 2 m SL (likely ~2.5 m TL, 95+ kg)  have been recorded in the open ocean adjacent to Ais, although it is likely that the individuals were transients beyond the carrying capacity of the archipelago. The size and armor of this species make it nearly immune to predation at even modest sizes, although there is a tradeoff of reduced speed and agility as well as heavy parasitism. Parasite fauna mostly consists of species shared with the Titan Pleco and other molluscivorous loricariids, although genetic analysis may reveal them to be cryptic species. It has been theorized that a very large ambush-predatory turtle and large carnivoran specializing on near-shore prey may represent a threat to the Longsnout Copotone, but predation events are probably very uncommon as the biomes inhabited by the predators are not frequented by the fish. Due to the relaxed predation, healthy adults develop considerable and highly polymorphic carotenoid coloration usually consisting of orange/yellow spots and stripes.

The Longsnout Copotone inhabits large rivers, brackish waters, and the open ocean so long is there is sufficient productivity. Adult F. accipenserinus are specialized for feeding on moderate to large molluscs and crustaceans, which are dug out (if necessary), handled by a suckermouth and highly dexterous barbels, crushed with molar-like teeth, and picked apart before consumption. Although highly effective, the suckermouth feeding strategy tightly constrains the size range of prey that can be taken; for instance the similarly-sized and closely related F. setadon has a proportionally enormous suckermouth capable of tackling the prey that F. accipenserinus can't. The Longsnout Copotone is by no means limited to shelled prey and can also take benthic fishes (including small loricariids), plant matter, and annelid worms. Juveniles, incapable of digging out or handling such large prey, feed on aquatic insects such as plecopterans and ephemeropterans before heading downstream. Predation pressure and competition from other benthic feeders is considerable at that early life stage, with only a tiny fraction of juveniles making it anywhere near adult sizes. 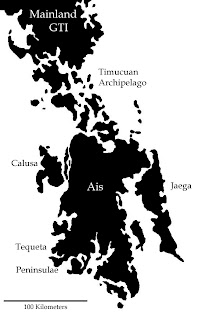 Geography of the main island of Ais, Ais archipelago, and adjacent mainland GTI. The main island is approximately the size of modern-day Flores. 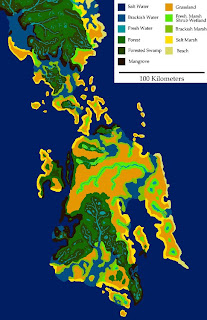 Biomes of Ais. Note that numerous small streams and ponds exist below the scale that can be shown.
Longsnout Copotone endemic to Ais, along with the occasional transient, migrate to large interior lakes in early spring to reproduce. Males briefly duel with outsized cheek-spines to assert dominance, fertilize the eggs of nearby females, and both genders abandon the eggs to return to their feeding grounds shortly thereafter. The large transients are often dominant in these arenas, but it appears that phenotypic plasticity keeps their offspring at the average size. Hybrids with F. setadon have been recorded, although this bizarre looking progeny appears to have lower fitness than either parent species.
Although rare on Ais, with perhaps 500-1000 individuals, the Longsnout Copotone is in no risk of extinction on the archipelago due to consistent gene flow and the tendency of adult specimens to live and reproduce for decades.

While it is not uncommon for some Speculative Evolution projects to include animals which are likely the product of "hey, wouldn't it be neat if X evolved into X?" - the evolution of the Longsnout Copotone is not as unreasonable as surface details may suggest. Loricariids already have roughly sturgeon-like morphology and habitat, and it is certainly worth noting that another clade of benthic armored fishes, poachers (Agonidae), have produced species that look and function essentially like small sturgeons (e.g. Podothecus accipenserinus).
No extant loricariids are known to occur in salt water, but sailfin catfishes (Pterygoplichthys spp.) are exceptionally hardy and can tolerate brackish waters [1]. Fishbase lists Pterygoplichthys disjunctivus as occurring in mangroves in addition to lakes and ponds, suggesting brackish waters may be a regular habitat for that species (a likely ancestor of most Ais loricariids). As the 'molluscivorous loricariid' clade will have evolved saltwater tolerance quite recently in their history, reproductive ties to freshwater are highly unlikely to break for some time, if they ever do.
The Longsnout Copotone is considerably larger than any extant loricariid, although it is notable that even the largest specimens are utterly dwarfed by the distantly related Titan Pleco. Several loricariid clades appear to reach or exceed 1 meter in total length [2], and introduced sailfin catfishes reach at least 50 cm TL with evidence for a maximum size exceeding 70 cm [3]. Catfishes have independently evolved gigantism in numerous clades such as Bagarius yarrelli (Sisoridae), Silurus glanis (Siluridae), Pangasianodon gigas (Pangasiidae) and others, so it is certainly possible for this trend to extend to yet another group. It is unknown what factors, if any, cause frequent gigantism in catfishes.
Loricariids generally feed by scraping algae, small invertebrates, and organic sediments from substrates [3], although it does not appear that feeding ecology has been very well researched for loricariids and aquarists note that some species can take molluscs and crustaceans (e.g. Acanthicus adonis). The suctorial mouth seems like an ideal method for handling shelled prey, although the 'molluscivorous loricariid' clade has also evolved prehensile 'barbels' (perhaps better referred to as tentacles) to aid in this feeding. Teeth in that clade are stronger and more molar-like than those of extant loricariids, but differ surprisingly little overall as their large size is sufficient in taking most prey.
[1] Hoover, Jan Jeffrey, et al. (2004). Suckermouth Catfishes: Threats to Aquatic Ecosystems of the United States? ANSRP Bulletin 04(1). Available.

The Ais project speculates on a far-future scenario where Homo sapiens is mysteriously absent, yet its influence is still apparent. After the largest metropolises have been relegated to buried artifacts and disrupted natural processes have been normalized, the biogeography of the planet remains permanently and radically altered. The Sixth Extinction, second only to the End Permian in intensity, caused numerous major groups to become either extinct or degraded to relicts. The transport of other species by H. sapiens, both willing and not, resulted in the Great Global Interchange, where species became established in regions they had little chance of reaching otherwise. This is a world where continents can have a handful of amphibians species, where Asia appears to only have turtles descended from the Red-Eared Slider, and where cichlids and loricariid catfishes often dominate local waterways worldwide.
As for Ais itself, it is the name of an island, archipelago, and surrounding mainland region which was subjected to particularly extreme human introductions - the now-inundated peninsular Florida. With its near-tropical latitude and newly-rerouted cold ocean currents, it offers almost unparalleled biodiversity and biomass. The numerous small islands and influx of species to and from the mainland make this a 'natural laboratory' comparable to the Galápagos or Trinidad.
The purpose of this project, aside from speculation, is to give commentary on the changes our species has caused. Additionally, many of our creations will not have completely made-up morphology, but emphasize just how strange they already are. Truly, one cannot invent things stranger then reality when one looks closely. This website is a collection of concepts which may not represent our final thoughts on some subjects, which we hope to some day have in book form.