1.8 m tall human with 0.85 m female, 1.30 m male, and 1.82 m male - all measurements in Strait Carapace Length.
While the Great Snapper overlaps in size with the Anthropocene Alligator Snapping Turtle, Macrochelys temminckii, it is a direct descendant of the smaller Common Snapping Turtle, Chelydra serpentina. The latter species, while not sympathetic to humans and hunted by them to a degree, proved secretive and adaptable enough to thrive in altered and degraded environments. When a macropredatory niche held by crocodilians recently became vacated, it is likely a combination of aggression, mobility, adaptability, and ability to handle armored prey such as loricariids and turtles, gave the Common Snapper-descendants the upper hand against Pythons and Alligator Snapper competitors. As the Great Snapper antecessor evolved larger body size, it became immune to virtually all predation and forced the pythons into more specialized niches.

Ais and/or the adjacent mainland was likely the seat of the Great Snapper's evolution, but the species has spread to all sufficient habitat on the mainland from the tropics to high temperature latitudes. A sister species occurs on the continent to the South. Great Snapper are capable of crossing considerable distances in the Ocean (at least 50 km) and have colonized numerous isolated islands. Seas are not the normal habitat of the Great Snapper, which is most commonly found in estuaries, swamps, lakes, and streams. Large males leave the water only rarely, but females are capable of crossing considerable distances over land to reach isolated bodies of water. It appears that the smaller size of the females is due primarily because of their need to cross land and lay eggs.

Great Snappers look like scaled-up versions of their ancestors, but exhibit some significant differences. Their heads are proportionally longer and more robust, with a prominent hook-like beak. Jaw strength is disproportionately great, which allows them to crush large armored prey and bones. The eyes are more dorsally oriented than their ancestor and the nostrils are at the end of a snorkel-like structure. The neck is longer and thicker than that of the Common Snapper, about 1/3 of the total length, and is typically retracted only before striking prey. The head and anterior portion of the neck cannot be drawn into the shell. To protect the unarmored structure, the neck is covered by pointed tubercles resembling denticles. The carapace is proportionally long, flat, and narrow with strongly pronounced bosses and reliefs. The shell is covered with algae, which provides camouflage. The limbs are highly developed and the primary source of underwater locomotion. The shell is highly apomorphic; it is approximately a third of the total length, very thick, and covered with three rows of serrated ridges; it is capable of being folded several times and when held against substrate, allows the turtle to 'spring' a shocking distance towards prey out of the neck's reach, such as those on land. The distance covered is subequal to that of the extinct crocodilians, possibly due to the recent specialization and sheer mass of the animal.

Gamerachelys has a very wide range of prey items, although they vary with the size of the Snapper. Younger individuals consume invertebrates such as molluscs and insect larvae, but start supplementing their diet with vertebrates as they grow larger. There are few species of fish, reptiles, birds, or mammals which can escape predation from Gamerachelys, however it is not certain what the outcome of a particularly large specimen meeting a 'nomad morph' Titan Pleco would be. Other large loricariids are, however, on the menu for the Great Snapper. Any vertebrate in or near the water is potential prey, although insufficiently small prey is ignored unless conditions become very poor. While on land, the Great Snapper will not hesitate to ambush any proximate animals. Carrion is also consumed, which the turtles are capable of detecting with their formidable sense of smell. Plant material is taken on occasion, most of which is fruit which had fallen into water.

Adult Great Snapper have no predators to fear, although fights between individuals of the strongly territorial species can result in fatalities and subsequent cannibalism. Hatchlings and immature individuals have numerous predators such as carnivorans, monitors, other turtles, wading birds, predatory fish, and others. Mortality rates are extreme in the first months of life, so enormous clutches compensate for this phenomenon.


While a (primarily) freshwater turtle capable of reaching similar sizes as the Saltwater Crocodile Crocodylus porosus, even larger turtles existed in the past. Stupendemys geographicus, a sidenecked turtle from the Late Miocene/Early Pliocene of Northern South America reached at least a carapace length of 3.18 meters, or 10'5", and may have been a bottom-dwelling predator [1]. The Eocene softshell Drazinderetes tethyensis had a 2 m total carapace length and is also likely one of the largest turtles ever [2]. Considering the number of recovered specimens, it is likely such sizes are not abnormal - plus, it is strongly suggestive of Great Snapper-sized being well within the realm of physical possibility.

The driving force behind the evolution of the Great Snapper is 'Evolutionary Relay', a process in which similar characteristics are acquired in a similar environment at different times. While crocodilians were reasonably successful in the region that was to become Ais, regional extinctions occurred due to competition with large introduced snakes and egg-pilferers, giving Common Snappers an opportunity to step into the recently vacated niche. The convergence is not extreme to the degree for the Great Snapper to be considered an 'Elvis Taxa', however. 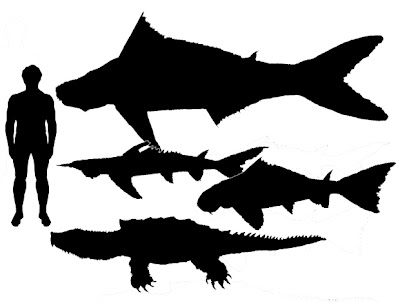 The Ais project speculates on a far-future scenario where Homo sapiens is mysteriously absent, yet its influence is still apparent. After the largest metropolises have been relegated to buried artifacts and disrupted natural processes have been normalized, the biogeography of the planet remains permanently and radically altered. The Sixth Extinction, second only to the End Permian in intensity, caused numerous major groups to become either extinct or degraded to relicts. The transport of other species by H. sapiens, both willing and not, resulted in the Great Global Interchange, where species became established in regions they had little chance of reaching otherwise. This is a world where continents can have a handful of amphibians species, where Asia appears to only have turtles descended from the Red-Eared Slider, and where cichlids and loricariid catfishes often dominate local waterways worldwide.
As for Ais itself, it is the name of an island, archipelago, and surrounding mainland region which was subjected to particularly extreme human introductions - the now-inundated peninsular Florida. With its near-tropical latitude and newly-rerouted cold ocean currents, it offers almost unparalleled biodiversity and biomass. The numerous small islands and influx of species to and from the mainland make this a 'natural laboratory' comparable to the Galápagos or Trinidad.
The purpose of this project, aside from speculation, is to give commentary on the changes our species has caused. Additionally, many of our creations will not have completely made-up morphology, but emphasize just how strange they already are. Truly, one cannot invent things stranger then reality when one looks closely. This website is a collection of concepts which may not represent our final thoughts on some subjects, which we hope to some day have in book form.